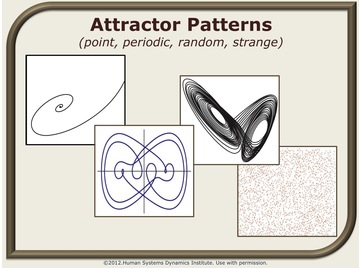 Attractor patterns are particular kinds of recognizable patterns that can help us understand our systems. They are the “traces” that are left in the system as a result of movement of its agents. Three types are critical.

Occur in repeating cycles. Examples include activities around planning for seasonal products, behaviors and rituals related to payday and budget development, and regular attendance in a faith community. Many cultural practices and rituals are also examples of periodic attractor patterns. In human systems we use periodic attractor patterns to increase agreement and certainty, pulling people to greater coherence and stability.

Emerge when there is bounded space that provides unlimited possibilities within. One example is the variability in particular relationships. Everyone has a general idea of what it is to be a mentor, but every mentor/mentee pair shares a unique relationship. The general definition is the boundary, with the multiple realities providing the unlimited possible patterns within. Often when we feel hemmed in by rules and regulations, it helps to think of them as strange attractor patterns. When we think of rules and regulations as point attractor patterns, we see them as delineating our only options for action. We believe they prescribe the only things we can do. If, on the other hand, we think of rules and regulations as strange attractor patterns, that opens our options. We see the rules as the boundary, and recognize that we have full creative opportunity within that boundary.