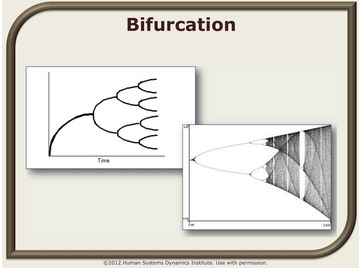 When the differences in a complex system generate more tension than the container and exchanges can hold, the old differences become containers as the system splits. This split is called a bifurcation.

Think about the relationship that exists between parents and a child. As children grow and find their own personalities and voices, they begin to differentiate themselves from their parents. The tension in the family grows as children push for later curfews, for choosing their own hair and dress styles, for greater and greater autonomy. That tension continues to grow until there is a break of some sort. The youth moves out on his or her own, graduates from high school and moves away to college. What was one “container” as a family is now two containers—one of the parents and the other holding the youth. That allows space for new relationships to grow if both “containers” are willing and able to build new relationships across that divide.

Political partisanship is another example of bifurcation. In recent years, inside the two major political parties of the US, differences have been becoming more and more distinct. Social conservatism versus liberal conservatism; fiscal liberals versus the fiscal conservatives; states’ rights versus federal power—these multiple and interdependent bifurcations led to the partisan stalemates that have come to characterize the political landscape. The two parties have become more and more polarized from each other; and within the parties themselves factions have begun to pull at the threads of connection that have defined US politics in the past.

Other examples in human systems include divorce, specialization within a field of study, emergence of factions within social or religious groups.

The major shift in tension that brings about the break up can manifest in myriad ways, from peaceful dialogue that re-establishes the new relationships to violent conflict that tears the two containers even further apart. Using the Adaptive Action cycle, models grounded in principles of HSD can help to construct fuller understanding of the dynamics of the situation and then can be used as methods to map out possible options for action. Using the CDE model, those who want to address the challenge can identify conditions that are shaping the conflict and then depending on what they see, they can select the most useful of the other models and methods to understand more clearly and then to take action.