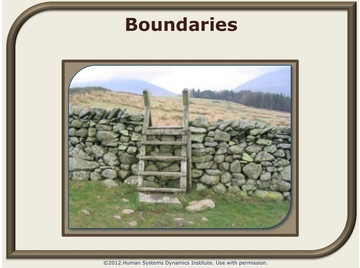 A boundary exists in a complex system whenever same and different meet. A boundary can be:
– Physical (fences, building departments, walls, belts) These boundaries physically separate the diferences, holding the similarities together.
– Emotional (affiliation, love, hate, fear) Emotional boundaries pull people in or repel them without physical limitations.
– Geographic (state or country borders, mountain ranges, oceans) These may be seen as physical boundaries, but they are natural boundaries separating geographic areas of the globe.
– Cultural (traditions, conventions, beliefs, rituals) Cultural boundaries hold the community together and set them apart from others by the coherent patterns they generate within the community.
– Based on any relevant difference in the system – These separate teenage and neighborhood cliques, for instance, setting them apart from others who are otherwise just like them.

Sometimes boundaries are permeable—things can pass through them easily. Boundaries between parents and children exist primarily due to age and role differences, are most often permeable as they share information, resources, chores, and other resources of value within the family.

As connections have become more global and countries have become less regional, all parts of the globe are becoming more diverse. This diversity is forcing boundaries to become more permeable as groups that used to be isolated and strongly bound are finding they are interdependent with other groups around the world. Sometimes, however, those boundaries remain impermeable, causing conflict and bias between bounded groups.

Sometimes boundaries are explicit, as in a culture’s use of surnames to shape identity. In earlier times, the tribe or community to which you belonged defined you, both inside and outside the group. Your last name was an explicit statement of the boundary where you stopped and the “other” started. That particular way of defining difference between self and other has continued through centuries fo cultural development, even though its evolution has taken slightly different paths, depending on local culture.

Sometimes boundaries are implicit. In today’s diverse culture, it is not always necessary or politically correct to make all boundaries explicit. For instance, in some countries, law dictates that employers cannot make employment decisions based on gender or age or physical disability. Those boundaries that define who someone is as male or female, and those that somehow separate “young” from “middle age” from “old” or an amputee, or blind or hearing impaired, may be differences, but they legally cannot be considered as differences that make a difference when those employers are hiring.

At the same time, there are individuals for whom particular characteristics are preferred. For them, race or religion or social class or background or life style may become an implicit boundary—one that is not spoken or described by law, but that is observed by tradition, action, and preference. When hiring a new scholar in a religious community, for instance, it would be essential to the Jewish community that their scholar be Jewish, to the Islamic community that their scholar be Muslim, and to the Baptist community that their scholar be Christian. Imagining otherwise would be an interesting shift in patterns and boundary permeability. This boundary condition of impermeability however, can be a productive preference when it strengthens a community or builds trust and a sense of belonging. On the other hand, taken to the extreme, this can also be the source of bias and prejudice.

Any boundary generates turbulence, but turbulence can be productive (like learning or love) or it can be destructive (like bias or war). The other conditions of the system (container and exchange) determine the nature of the turbulence at any given boundary.