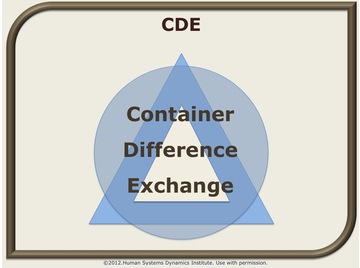 The Eoyang CDE describes the three conditions that determine speed, direction, and path of a system as it self-organizes. These conditions shape and express options and interactions of agents as they self-organize. The conditions bind them together such that they will connect across the differences in the system and generate patterns of behavior and thought. Glenda Eoyang discovered these conditions in her research about and with organizations. The three conditions, elegantly simple, are brief and powerful.

The Container bounds the system until patterns can begin to form. Containers form the boundaries between one system and another (see Boundaries). Differences represent significant diversities in the system, and are the points of emergence and change in a system. Exchanges allow for movement of information and other resources across a system and between the system and its environment (see Designing Exchanges).

Because we understand the dynamics at work when these conditions shape the self-organization that generates patterns in a system, we can take informed action to shift the conditions and shape the emergence of new patterns.

’’’Containers’’’ can be concrete realities in the system, such as the physical location or space. They can also be concepts and ideas that draw people together. Meeting agendas, for example, create a boundary that shapes the patterns of flow and productivity in the meeting. Short agendas force quicker decision-making and less discussion. Longer agendas allow for greater exploration of the differences in a system. Smaller containers generally speed up the emergence of patterns, larger containers allow more richness in those patterns. Rock stars or powerful political leaders are “conceptual” containers in that people are drawn to and influenced by them. Political or social ideology can become conceptual containers. Finally there are psychological, or affinity, containers—age, gender, personal bias, shared history, family ties, background and so on—that serve to bind individuals into identifiable groups.

’’’Difference’’’ in the system allows for change as the agents negotiate and accommodate the diversities that separate them. While a highly diverse system usually has too many differences to count, the important shifts will happen around those differences that are most critical to the system’s overall functioning. For instance, there may be ten people in a training room; each one a unique and special human being. If you tried to deal with all the differences inside that training container, you would not be able to name them, much less consider the impact of all those differences on the whole. On the other hand, in that training session, the degree of skill, understanding and difference in role (teacher or student) will establish patterns of interaction that could dominate the learning session. Or, difference may be represented by the kind of diversity that’s present: leadership skills vs accounting skills; or it may be represented by degree of diversity: more or less experience in a given job. Increasing, decreasing, or introducing new differences will shift the conditions and change the emergent patterns in a system. Looking at the differences that make a difference in the system is a key aspect of CDE.

The third condition, ’’’exchanges’’’, refers to how agents in a system connect among themselves and/or how the system connects to the greater environment. Exchanges can be accomplished through typical, traditional human interaction; they can be the rules and regulations that inform decisions; resources such as money, goods, and time that represent value in a system; or what happens in the times agents share, such as play, relationships, or work. Any of these provide connections that shape the patterns of our existence, and shifting exchanges will bring about change in the system.

Because the three conditions are massively entangled with each other, it is only necessary to shift one condition to bring about change in the other two. For example, when I make a container smaller, generally the differences become more significant, and the exchanges happen faster. It is critical to remember, however, that, while you can anticipate the change you might trigger, you can neither predict nor control just what that change will be. HSD practitioners and professionals who use the CDE model to help them understand and influence the dynamics of their systems use Adaptive Action to enable them to respond appropriately when unexpected consequences arise.