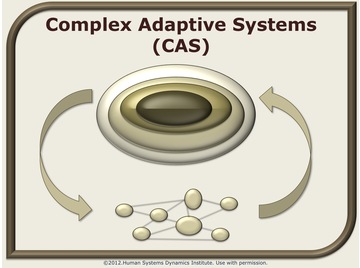 A complex adaptive system (CAS) is defined as “a group of semi-autonomous agents who interact in interdependent ways to produce system-wide patterns, such that those patterns then influence behavior of the agents.” (Dooley, 1996)

In human systems, each agent (person, groups of people and/or clusters of groups) can make their own choices about when and how they interact. Whatever these interactions are, over time some interactions of agents will be more frequently occurring than others, generating system-wide patterns of behavior that come to characterize that system. Subsequently those patterns will then reinforce the behaviors of the individual agents, which serves to strengthen the patterns.

We call these predominant patterns that influence agent behavior “culture.” Whether it is the culture of an organization, a group of people or a family, the patterns of expectations and decision making become characteristic of that particular group. Ultimately behavior is influenced by those patterns, as people try to “fit in” the existing culture. Think about the cultural differences that exist between faith communities, between ethnic groups, between local practices within a larger community. Set patterns of behavior characterize these cultures, and those patterns reward individuals who participate in them and damp the behaviors of those who do not.

Patterns emerge as agents seek to sustain the system, building coherence across the whole by adapting to the challenges in the greater environment and by adapting to internal needs among the members of the group. Culture emerges as a group agrees (either explicitly or implicitly) and acts on their shared identity, on what’s important to them, and on how they will connect. (see Generative Engagement)

Some patterns are more productive than others, when considering sustainability and fitness. What helps someone reduce tension (find fitness) with their nearest neighbors in the system might increase tension (decrease fitness) with their greater community. For example, the behavior in a street gang is highly regimented, with clear expectations, hierarchies, and roles. To sustain participation (reduce or resolve tension) in such a culture often requires behaviors that put the street gang members at odds with the larger community, as manifested in turf wars, violence, and legal issues. Individuals and groups have to negotiate and navigate these differences in the ways that seem most accessible to them at any given moment.

Because cultural patterns are self-reinforcing, to change the “culture” requires individuals to change their behaviors on such a scale that they can influence existing patterns—amplifying those patterns they find productive, and damping patterns they find non-productive. This is an ongoing and difficult challenge as individuals seek to shift shared expectations and agreements and generate new patterns.