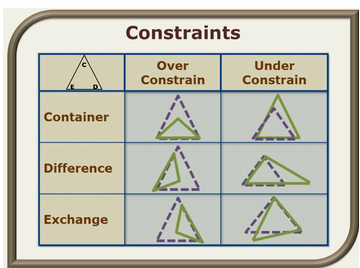 Constraints are limitations or restrictions that emerge from within a system. Also known as “degrees of freedom,” this is about the degree to which expectations, policies, processes, interactions, and relationships from inside the system allow agents to make choices about their own individual and group actions and behaviors. Constraints emerge in a system as a way to manage the “chaos” and uncertainty that exists, and shape the path of self-organization and the emergence of patterns across the system. Constraints influence patterns by shifting the speed, path, and direction of self-organization. If you want to change patterns of self-organization, you would either find ways to constrain the system more—make expectations more specific—or to decrease constraints—decrease specificity.

The Landscape Diagram offers a “map” for how constraints can shape relationships and action in a complex adaptive system. If constraints serve to increase agreement and certainty, their emergence will shift a system from upper right (unstable) to lower left (stable) on the diagram. Think about the emergence of a new product. Research folks explore new trends and possibilities (unstable, upper right) until they can begin to see some patterns begin to emerge. The concept then shows up in the emergent space, where the patterns become clearer and developers define and describe the new product. Ultimately the developers create specifications for manufacturing staff, who pull the process down into the lower left into production procedures and processes that are close to agreement and close to certainty. Say that over time, new technology or a design flaw requires that the product be re-examined. Manufacturing folks give the product back to development folks who bring in new ideas from the research folks to refine their design, create new specifications and send it back to manufacturing for continued production. The same general cycle describes the emergence of any pattern in human systems—products, poetry, rules and regulations, relationships, new ideas and concepts. Constraints from inside the system shape this path of emergence at all scales.

We think of constraints in one of three ways.

There is no pre-set level of constraint that a system “seeks” or that we can set as a benchmark for all similar systems. Acceptable degrees of freedom or appropriate levels of constraint are about fitness of the system in its immediate internal and external environments. A system that is ideally constrained is able to function productively, engaging in self-organizing and adaptive behavior that allows it the freedom to find the best “fit” in the greater environment. When a system is unable to find that level of fitness, conflict emerges and the sustainability of the system is in jeopardy.