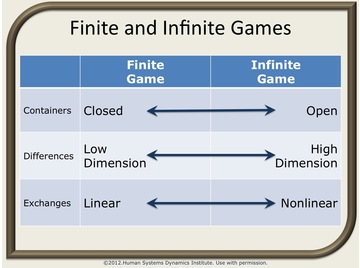 Some games are bounded and predictable, like baseball or basketball or bridge. We call them finite games, and we play them to WIN.

Other games, like marriage, productivity, and health, are unbounded. We call them infinite games, and we play them to KEEP PLAYING.

James P. Carse (http://bit.ly/YfsS2y) wrote a lovely book (http://amzn.to/12UUZvx) about when, how, and why to play each kind of game and what it means to play each one well.

While lots of models, methods, and approaches teach you how to plan the finite game, HSD focuses on strategies to thrive in the uncertainty of the infinite game. All the models and methods on this wiki site help you and your organization build capacity to keep playing the infinite game. We began our exploration of finite and infinite games with Carse, Finite and Infinite Games. We’ve continued the journey and found many interesting observations about playing in open, high dimension, and nonlinear space.

- You can play a finite game inside and infinite one, but not the other way around.
- Communities are more likely to play infinite games than organizations.
- Infinite games rely on trust, courage, and adaptability, while finite ones depend on strength, skill, and control.
- Human systems are always infinite games, but sometimes it makes sense to play them as if they are finite.
- Neither one is better or worse. The only risk is playing one and expecting results of the other.
- Successful leaders play infinite games.
- The only way to thrive in an infinite game is by Adaptive Action.