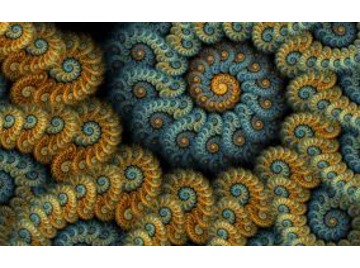 Fractal patterns repeat themselves at different scales in a system. Created mathematically by feeding one non-linear equation into a computer, they create beautiful visual images, like the example on this page. When viewed on a screen, it is possible to zoom in to smaller and smaller aspects of the whole. At each level, the same patterns will emerge.

In human systems, it is common to observe this same type of scaled similarity. For example one short list of simple rules (see Simple Rules), when followed specifically, will generate similar behavior at all levels of an organization or community. Culture is a fractal pattern that fuels similar behaviors among all members of a community or group.

For pictures of fractal images taken of the earth from Google Earth, follow this link.