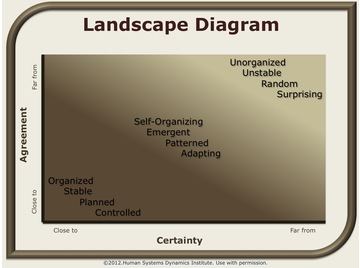 The Landscape Diagram demonstrates the impact of constraints on a system. It gives you a “map” or picture of how those constraints influence patterns of activity and decision making across the whole system.

Activities and interactions in any system can be assigned to one of three zones, based on the level of constraint, relative to either or both dimensions. Given any particular situation, the two dimensions can be graphed according to the constraints that are in action.

NOTE: Any given map on the Landscape Diagram represents a single situation or event or set of conditions. What is highly constrained for one situation can show up as random and unconstrained in another. For instance, Company A may have done major research and development on an idea and created a new level of technology or product development that another group or Company B has no idea about. For Company B, those ideas are still highly unconstrained—individuals in that group are far from both agreement and certainty about it. Once they become aware of the idea, it begins to be constrained and moves into the self-organizing realm as patterns emerge in Company B about the new idea’s/product’s use and/or value to them. Plus…

NOTE: Any given map may change across time or circumstance. Say that Company B becomes aware of the new idea and begins to consider its possibilities, opportunities, and limitations, patterns begin to emerge as agents in the system move toward higher levels of agreement and certainty. Say that Company B likes the new idea/product so much they decide to adopt it as their own. Then they have work to do to help increase agreement and certainty, often to the level of the organized zone. This phenomenon is described by the Maturity Model of Change and becomes the basis of a useful tool for helping us understand and move through change in a relationship or organization.