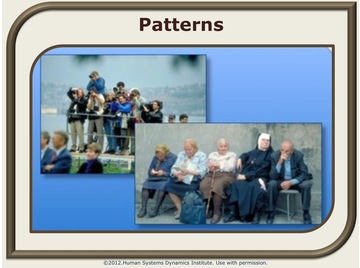 Pattern = similarities, differences, and connections that have meaning across space and/or time

They emerge as the agents in the system self-organize within the constraints they establish among themselves. In HSD we believe that patterns emerge from the influence of conditions that shape the speed, path, and direction of self-organization. Within the boundaries of the system (Container), the agents connect (Exchange) with each other across the differences that exist (Differences).

Patterns may be fleeting and pass through the system in relatively short order. For instance in times of limited or shrinking resources, patterns of spending and exploration may change significantly. Patterns of personal relationships may shift as people become more competitive for the resources that exist.

On the other hand, particular patterns may be more predominant and come be characterize the whole system. When this happens, we think of that pattern or combinations of patterns as the “culture” of the system. This happens in systems because of the nature of a complex adaptive system, where the agents’ interactions generate system-wide patterns that, in turn, influence the future behavior of the agents. In this case, patterns are fractal in the system, which means they are generated by similar conditions that emerge at all scales. Individual behaviors, group behaviors, even institutionally, the ways people interact and make decisions are self-similar and self-reinforcing. What happens at the leadership levels in the system will be replicated in multiple ways at all levels of employment and responsibility.

Patterns provide the texture and impetus for change in a system. Leaders in systems use patterns to inform their decision making in a number of ways, identifying the patterns that exist in the system, designating patterns they believe are most beneficial to the system, and working to shift their internal conditions to generate those patterns.