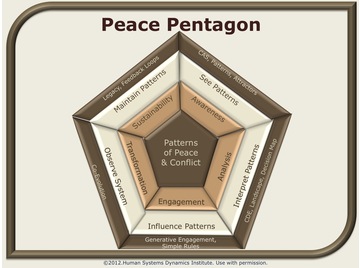 This model provides a guide for understanding conflict in a way that allows members of the system to define their own healthy and productive interventions. By building adaptive capacity in the system, this model enables individuals and groups at all scales to assess and understand their conflicts, identify solutions, and work to generate and sustain new patterns of behavior and thought.

First it is critical to understand the assumptions that HSD makes about conflict and peace in a complex adaptive system.

It is from these assumptions that we have mapped out the Peace Pentagon model. Thanks go to Lois Yellowthunder and Vic Ward for their collaboration with us to develop the concepts represented here.