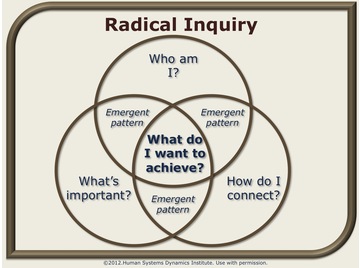 Radical Inquiry is a process of using three questions to clarify vision for an individual or group to help them identify specific actions for moving toward what they want. It uses a modified Venn diagram to explore the conditions (see the Eoyang’s CDE model that can generate the patterns they want in their lives to move them toward their ultimate goals. Traditionally in a Venn diagram, the overlapping space between circles reflects the points of similarity in the two circles. In this application, however, the overlap represents the emergent patterns that come from the conditions represented in the circles themselves.

For example in the picture of the Radical Inquiry here, you see that where the circle labeled “Who am I?” overlaps on one side with the “What’s important?” circle. It represents the emergent pattern that is possible when y take action to pursue what is important to you

Overall, Radical Inquiry is a process that can be used by groups of all sizes and individuals to help them clarify desired patterns of interaction and behavior, and to define actions they can take immediately to begin to generate those patterns.