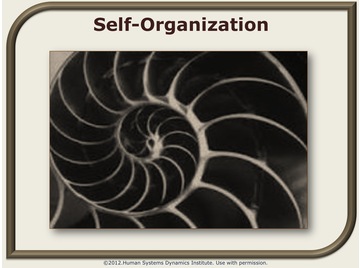 This is the process by which members of a complex adaptive system build relationships, learn from each other, and create system-wide patterns. Through the process of self-organization, a system adapts to changes and challenges internally and externally.

Self-organization in neither naughty nor nice. We think of self-organization as a process that is intrinsically positive and good for the system. It can, however, create patterns that are internally coherent, but at odds with conditions external to the system. For example street gangs are very internally coherent. Their lines of authority, rules for membership, and boundaries hold them together and establish a tightly coherent system. It is when the gangs “bump” up against the greater society that they experience turbulence and conflict because they are not at all coherent with those laws and expectations, and self-organization becomes more constrained.

Often people want to ask, “What is the target of a system’s self-organizing?” In HSD, we borrow the old saying, “There is no there, there,” to reflect that there is no one state or endpoint toward which the system self-organizes. Rather, a system self-organizes in response to the constraints inherent in the challenges and opportunities inside the system and in its greater environment. Self-organization is about shifting to release the tension among the differences in they system, moving it toward greater fitness. And because there will always be difference in the system and because the internal and external environments of a system are in constant flux, there is no end to self-organization. It is a continuous process of adaptation and seeking fitness.