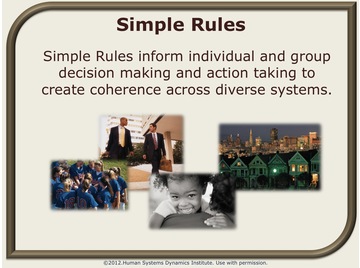 Simple rules guide behaviors and interactions of members of a CAS. Whether by conscious agreement or by unspoken assent, members of a CAS appear to engage with each other according to a short list of simple rules. One group that we worked with has re-named the simple rules as “seed behaviors” to reflect their generative nature.

Simple rules establish the conditions that give rise to patterns in the system by shaping the conditions. These can be the covert agreements that emerge over time in a system, creating its culture. Often new leaders come into a system and state their intention to change the culture and “create a new world” for the workers, stakeholders, and customers. The problem is that unless intentional steps are taken to uncover and change the existing simple rules that hold those patterns in place, no amount of leadership command will change the system wide patterns. Simple rules can be used retrospectively to understand what shaped the conditions to generate whatever patterns are currently in the system.

On the other hand, simple rules can be used prospectively to shape a desired future. In HSD we believe that groups can identify patterns they want to generate and define simple rules that seem most likely to help them generate those patterns. What is critical in establishing system-wide patterns is that everyone has to use a shared set of simple rules at all levels of decision making and action. This requires a shared understanding of what the rules mean and agreements to use the rules to make decisions.

The simple rules of human systems dynamics are:

See The Simple Rules Foundation website for more information and examples of simple rules from people in diverse settings.